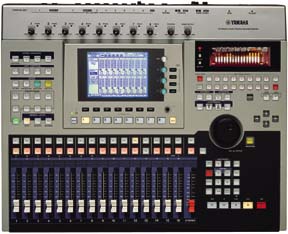 EQUIPMENT AND SETUP
1. In audio, the hardest and most costly items to "get right” are the transducers: The microphones and monitors. But without excellence in those two realms, your recordings won’t sound right. Pour the bucks in here if you can..
2. By and large, cardioid microphones will be most useful for home purposes, where spaces are tight and reflections are high.
3. Try to setup your gear ergonomically with the most-used gear easily accessible, so that merely using it won’t fatigue you.
4. Buying used microphones is a shaky proposition. Mics can be damaged by a fall in such a way that the frequency response is drastically altered but they still work. The only ways to tell if there has been drop damage to a mic are to plot its reponse or audition it against a known-good mic.
5. Trying to stop vocal "pops" without loosing high frequencies to foam windscreens? Look HERE to build a great no-loss windscreen.
6. Looking for a way to label your CDs? Here's my review of one system.
7. One of the greatest pieces of kit I've added to my little music room is a "Soundseat". Good seating extends the amount of time you can work and play in your home studio by removing fatigue and back strain from the equation. The Soundset was designed for musicians, by a musician. Each seat is custom-built. HERE is a little review of the Soundseat which I wrote up. One hint: If you play in classical position, consider ordering a shorter gas lift to allow you to set it low enough.

RECORDING TECHNIQUES
1. Place your instruments in the center of the largest room possible. The “boundary effect” will cause bass to increase as you get near a wall or corner. A bass rise and near-wall reflections often betray home recordings.
2. To cut down on sound leakage between instrument tracks, use distance, blockage, and mic pattern. The further apart instruments are, the less they will bleed into each other’s microphones. For blockage, place seat cushions, thick quilts, or boxes covered with quilts between instruments to cut down on mid- and high-frequency leakage. Face instruments and microphones so that the microphones’ rejection areas face towards instruments you don’t want to pickup.
3. Bass frequencies are the hardest to isolate. Bass flows right around your blocking items like they weren't there. Try to run bass instruments direct or place the amplifier in another room.
4. As you record, begin to think of your sounds in terms of how they will fit together. "The perfect guitar sound" often won't blend with the rest of the mix. Many successful producers try to define acoustic spaces for each individual instrument so they don't walk on each other or turn the mix to mush. Use an "acoustic pigeonhole" approach: A frequency band for each instrument and every instrument in its own band. You might want to roll off the bass on the acoustic guitar and piano sounds so that they don't compete with the bass.
5. When you mix, remember that left to right physical spacing can also offer separation between instruments. The more instruments you have in one location, the less headroom you'll have there and the less intelligible anything in that area will be. Build a drum kit that spans the speakers but centralizes kick and snare. For more activity, pan doubled rhythm instruments outboard or guitar and piano outboard, each to a side.
6. Struggling with recordings and mixes which sound too "boxy"? Go here
7. Fight the tendency to want to tailor your sounds with additive EQ. "Additive EQ" is what happens when you bring up the gain on a frequency band. It is natural to want to peak up the EQ where you don't hear enough of what you want, but the result can be an unnatural build-up of energy and resultant loss of headroom at the frequency where you add. Instead, try removing the other frequencies that are masking the fequency area you want to hear with subtractive EQ.

SESSION TECHNIQUES
1. Distinguish between band-oriented recording and overdub-oriented recording. Some bands just sound better if the basic tracks are recorded with the band together. Thirty years into their career, the Allman Brothers are an example. They may overdub voices and leads and punch-in fixes, but the basic tracks go down with the band together. Boston, on the other hand, often went down one instrument at a time. Use whichever performance technique best suits your music.
2. Fight the tendency to get obsessed with a single sound. Measure yourself by this standard: Two months from now, will it really make much of a difference to you?
3. Fight the tendency to over-use any new piece of gear. It's called "New Toy Syndrome".
4. Fight the tendency to play loudly and with large amplifiers, except on overdubs. It makes separation between tracks difficult.
5. Fight the tendency to put too many elements in each song and fill every moment. Silence communicates as much as sound. Clean, precise tracks are more pleasing than busy, cluttered ones.

THE MIX
I don't know what method you use to build up the mix, but here's how I'd do it: The bass and drums are at the heart of rock and roll. You need to mute everything but the bass guitar, kick, and snare. Get your mix of these going, with a positive lock between the bass and the kick. Get a basic snare reverb. When you get the blend so you can't keep you feet still, add the other drum instruments and, if you have one, put everything so far on a submaster fader.

Next build up your rhythm guitars, keyboards, and fill instruments. Use effects and panning to put them in their space. If you have a submaster fader, put these instruments on one. Now add your vocals and put them on a submaster. If you've submastered, you've now got the rhythm section on two faders and the vocals on one. Tweak your panning to make space for the vocals. Add your solo instruments and you are ready to balance. Use your subs to push up the rhythm instruments (guitar, keys) as the vocals end, to fill the quiet space. Remember to build the mix with headroom for some type of crescendo at the peak of the song, if called for.

A GENERAL NOTE
If you are building a studio at home, make it an expression of your own personality and interests, a comfortable, cozy workplace for YOU. Don't try to match the ambience of a "professional recording studio": They've got more money than you to make things high-tech but, ironically, they often struggle to make their high-tech studios comfortable enough to feel like home!

PHILOSOPHICAL
In the beginning, it's hard to flow between the various tasks involved with recording: creative (artist), technical (engineer), and administrative (producer). One approach is the "hats" approach: Between tasks, stop, figuratively remove one hat, and put on another. Another is the "time" approach: put time between the engineering side and the performance side so you can get out of the technical mindset. If you are shaky in some of the tasks, it can help to bring in a trusted friend to take up the slack.