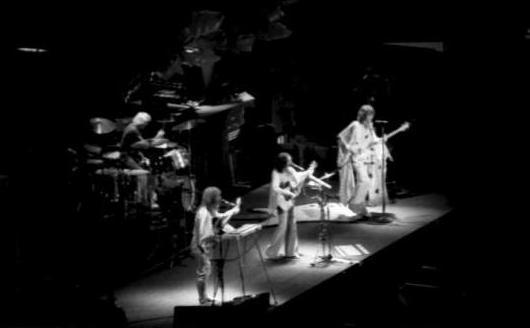 YES at the Hampton, Virginia Coliseum, 1976


I always seem to listen to a musical selection or watch a video with the question running in my mind, "How did they do that?" Often times it is an easy-enough question percolating, such as, "How did they know when the guitarist's solo was over in order to return to the body of the song?" For me, it is fun to detect the visual or musical cues they use to call each other back or to coordinate a section or accent. Was it a musical cue? Was it a visual cue?

One year I received a copy of YES' House of YES DVD for Christmas. It was a great performance at a nice, intimate venue. To begin with, YES isn't always easy to follow due to their extensive use of odd time signatures and alternating measures of different signatures. They top that off by using stage setups that isolate each of the players from the others. But as I was watching this video, I saw one of those interesting passages that was so convoluted it begged me for some analysis. The passage was the climax of their 1972 piece, “And You and I”. At this climax on the original studio recording, we exit 4/4 and encounter a lap-steel melody played over a series of stabbed chordal accents played by the whole rhythm section. By counting it out, I figured out that they made it work by having the guitarist play in 3/4 over the rhythm section in 6/4, and the rhythm section is setting its stabs on the one and four beats of the 6/4. Okay, easy enough (not really). But stay with me...

Live and on the DVD, the passage is entered from 4/4 with a ritardando of flams and rolls served up by drummer Alan White, and then my whole 3/4 & 6/4 scheme simply goes to pot. I tried various time signatures and tried counting 16ths and 32nds, to see if they had simply rearranged it with a more keen sense of timing to make it a bit less predictable. No luck, the stabs aren't lining up with anything, which makes this passage a-tempo and our job much harder.

With most bands, you simply listen and watch everyone’s eyes to see who they are keying off, but this is a little more complex. Failing the usual signs, the next clue is to look for someone who is watching no-one else: He's probably the clock. However, in this example, everyone is facing roughly toward the audience and no one appears to be watching anyone else. Guitarist Steve Howe is off in his own little world switching from his Gibson ES-175 to his Fender lap steel, their bassist, the late Chris Squire, the band's "class clown," is dramatically "playing the audience", as well as his bass, while stomping a set of Moog Taurus bass pedals to fill out the bass. Everyone else is looking down in concentration while they hit the stabs. This is a tough nut to crack.

Okay, time for forensic analysis. What's different from the record? A-tempo stabs. What else? Steve Howe has added a little tail-in to each of his attacks which coincides with a stab from the band. But how (Howe) do you get the rest of the group to come in together on the a-temp stabs, when only a few of the stabs coincide with Steve's playing? AH! Back to forensic principles. Let’s back up the DVD and follow the eyes again. Like a Crime Scene Investigator, string a piece of yarn from each set of eyes to the place where they are looking and they will intersect at the place where everyone is getting his cue.

Ah-ha! We have a tandem clock! Steve is throwing predictable cues to Chris Squire. Squire keys off the little tail-ins which telegraph Steve's attacks. Then, in a move I initially dismissed as pure theatrics (typical of Squire), he very predictably and obviously, in a smooth, two-step motion, cocks and drops his foot onto a Taurus pedal to signal the stab. And sure enough, in rapt concentration, everyone else in the band is looking down... at Chris' foot.