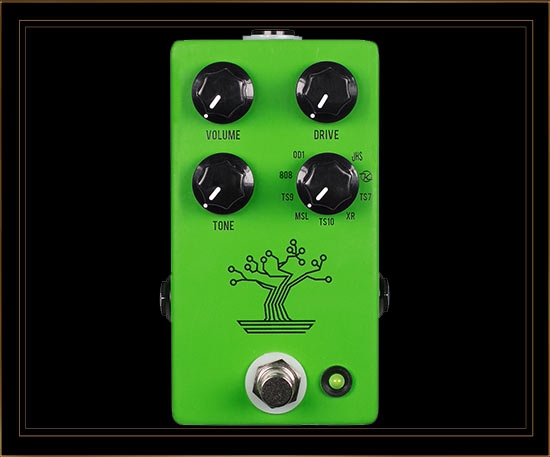 08/01/2022
I'm going to admit right off the top that I've never owned an Ibanez Tube Screamer, that little green OpAmp-powered monster from the '80s that shaped the distorted guitar sound of a generation. Why? I've mostly been a "guitar into amp with short cord" kind of guy. I've fiddled with a Screamer but never was able to quite work out my relationship with the thing. But circumstances change and needs come upon you. I've got some amps that have drive channels that are, shall we say, less than stellar, and would welcome a little drive help. But the inevitable question always arises, "Which one?" Since its inception in the late 1970s, the Tube Screamer has spawned more versions, modifications, and clones, than probably any other pedal. Many, many players have a strong opinion of just exactly which is the best and which works best with which type of guitar. It really muddies the waters when you are trying to choose. I was moving some gear and decided to invest some of the proceeds in a Screamer and thought, "Why not splurge and get a version that contains as many versions as possible?" I'd read about the JHS Bonsai in the trade magazines and was impressed with descriptions of what went into the pedal. The Bonsai unit offers nine Screamer versions in one box, so I decided to track one down. It is more expensive than most screamers but there's a reason, and we'll find out why later.

The Bonsai is housed in a green-painted aluminum box with a typical medium stomp box footprint. I/O is on the sides and the required standard 9v power jack is on the top. There are three pots, a multi-position rotary switch, a green pilot LED, and an in/out footswitch that provides true bypass. The pedal is a little taller than most pedals of that size but it needs to be to house a bit more, um, "schtuff." By that, I refer to the fact that this is one complex little pedal. I had originally thought that the pedal produced its versions through emulation. Um, no. Then I thought that it just switched a couple of components in and out to simulate the versions. Um, no. What changed my mind was the description in an article, pictures of the insides of the thing, and listening to an interview with designer Josh Scott. I came to realize that this is nine pedals, replicated on the component level, in one case. Best I can tell, there are multiple paths, one for each pedal. There are some shared components but many that are specific to one pedal and these are placed in the path as needed. The guys at JHS have included multiple OpAmps including 4558s and R4558Ls. They've replicated buffers where they were vital to the version's sound. They've chosen to replicate the component drift that has occurred over the years to make some of their classic examples sound wonderful and different. The make up of each version is assembled via the rotary "Mode" switch. That switch controls a central logic chip which in turn switches many, many analog switches. There can be into the tens of circuit re-routings when you rotate the switch one step. However, the signal lives its life entirely in the analog world. Oh, my.


The main board. Click to embiggen
Note the dedication to the original designer.
Courtesy user djchaseb from the Gear Page

The switching board with switch at lower right. Click to embiggen.
Courtesy user djchaseb from the Gear Page

DISCUSSION AT THE GEAR PAGE

So, how does this play out? All of the versions are authentic, right down to the component level. They feature different basic output levels, different gains, different blends between clean and dirty signals, and different tone systems (or none at all). For each of the versions, all of that is accurately reproduced, not simulated. No attempt has been made to smooth the differences between them or match levels. In the studio that is great. There is one caveat: You'll have to learn how those characteristics interact with your guitars and amps and learn how to set the controls, depending on the selected mode. Some versions have high output levels and some low. Some have high gain and some low. Some are bright and some darker. But the results are outstanding! If your guitar doesn't like a particular version, just switch! The wide variety of versions just about guarantees you can find something useful for your various guitars. I've tried a Les Paul, a Tele, a Super-Strat with humbuckers and coil splitters, an SG, and an ES-335, and there was something for every guitar in the bunch.

Essentially, rotating the selector counter-clockwise from the upper left, the pedal serves as an archaeological timeline of the Tube Screamer. Here are the nine versions:


OD-1 - This version reproduces the original, orange Maxon OD-1 from 1977. It features symmetrical clipping, it inverts the signal phase, and it doesn't use the tone knob.

TS-808 - The original Ibanez small-button green monster from 1979 with the pronounced midrange and smooth sound.

TS-9 - The Screamer in the large-button 9-series case from 1982. The midrange was shifted slightly lower and there is a bit grittier feel to it.

MSL - The Ibanez Metal Screamer from around 1986. This one has higher gain, a fuller bass, and more compression than the previous versions, to accommodate 1980s metal.

TS-10 - Also from 1986, this one features more low-end roll-off, lower gain, and a certain crispness. This one is favored by John Mayer.

XR - This is the EXAR, a Polish clone from the late 1980s that offers higher gain, a different sort of distortion, and more transparency than others.

TS-7 - The "Tone Lok" version from 2000 had a "hot mode" switch that offered more distortion and volume. This is the loudest, gainiest version and has extended bass as well. This one is for shredders.

Which ones am I loving? The Keely Mod Version and the JHS Strong Mod both allow a cleaner boost, which I like, but the TS7 is a shredder's paradise. To my ears, a hallmark of cheap pedal distortion is the fizz on top. Being a fan of power amp distortion, I have never enjoyed insect-attracting overtones. The Keely and JHS versions probably do the best job of moderating the fizz of all of the versions.

So, if you ask me, if you are looking for a Tube Screamer and basically want it all, the JHS Bonsai is a great place to start!