The Musician's Room: Tuning a Guitar 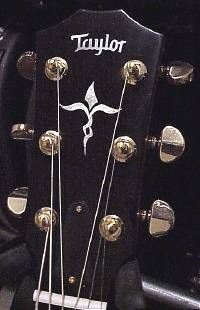 Why, when my tuner says it's right, can my guitar sound out of tune? Well, there's a right way and a wrong way. No, really, you can learn alot about the nature of your guitar from this!


The following is a reprint of THE GUILD OF AMERICAN LUTHIERS data sheet #45.


Many guitarists are frustrated because of their attempts to tune the guitar to pure chords (free of beats). These particular players have very sensitive ears that prefer pure intervals and reject the mandatory equal temperament. They tune their guitar beautifully pure on one chord only to discover that the next chord form is unacceptable. In too many instances they assume that there must be a flaw in the workmanship on the fingerboard. Their problem is not in the construction of the guitar. It is one of pure tuning verses equal temperament.

You must accept this compromise because the guitar is an instrument of fixed pitch and the strings must be tuned to tempered intervals, not pure. Equal temperament is the name given to a system of dividing the chromatic scale into 12 equal half steps. Guitarists who have been trying to tune to one or another pure chord form must learn to understand and accept equal temperament. (They might be interested to know that to approximate pure chords on all forms would require about three dozen frets within the octave.) The system of equal temperament reduces the number to twelve, thereby making manageable all instruments of fixed pitch.

On the other hand, all harmonics at the 12th and 5th frets, being one and two octaves above the open strings, are immediately useful as explained below. All octaves and unisons are pure on all instruments of fixed pitch. Therefore, you may use harmonics at 12th and 5th as reference tones in the following tuning instructions.

Actually this discussion and the following suggestions are for those players who have been tuning to pure intervals. When the steps have been followed correctly the guitar will be as perfectly tuned as it could be in the hands of a professional. Nevertheless, when you have finished, your sensitive ear may notice that on each major chord form there is always one tone slightly high. If you start adjusting a particular string on a certain chord form, you only compound the problem because then the next chord form will be completely objectionable. Tune the guitar as instructed below and let it stand. How to help your ear accept equal temperament: It is easier to face a problem if we are prepared in advance and expect it. If you are one of those persons who is sensitive to pure intervals, here is what you are going to notice on an absolutely perfectly tuned guitar in equal temperament: Play an open E major chord. Listen to G# on the third string and you most likely will want to lower it very slightly. Don’t do it. Ignore it. Enjoy the overall beauty and resonance of chord just as does the pianist.

That troublesome second string: Play an open position A major chord. Listen to the C# on the second string and you may want to lower it slightly. Play a first position C chord and listen to the E on the first string and fourth string at 2. These tones are slightly higher than your ear would like.

Now play an open position G chord. Listen to B on the second string. Yes, it would sound a little better if lowered ever so slightly. Why not try it? Slack off the second string a couple of vibrations and notice what beautiful G chord results. Now play the C chord and with that lowered second string, and you are going to dislike the rough C and E a lot more than before. Take the open B, second string back up to equal temperament so that it will be equally acceptable on all forms. Learn to expect and accept the slight sharpness of the major third in each chord (and oppositely, the flatness of the minor third in each minor chord). Train your ear to accept tempered intervals and you will be much happier with your guitar.

Tuning the 2nd string: Play a harmonic on the (in tune) 4th string at twelve. As this sounds, adjust the 2nd string until D at the third fret is in pure unison. As you have used two fretted tones for references and as the frets are positioned for tempered intervals, you now have the open 1st, 2nd ,4th and 6th strings in tempered tuning.

Tuning the 3rd string: As it is easier to adjust a string while listening to a continuous reference tone, you may first try the following: Play a harmonic on the (in tune) 4th string at twelve and as this sounds, adjust the 3rd string until D at the 7th fret is in pure unison.

Double check: Now make this check to see if you have been accurate or if the instrument plays tune when fretted at seven. Play a harmonic on the (now tuned) G string at twelve, and as this tone sounds, play G on the 1st string at three. The two tones should be in pure unison. If they are not, either you are at fault or the instrument doesn’t fret tune at seven. Go back to the beginning and carefully check each step up to this point. If the tones are still faulty, then readjust the 3rd string until the harmonic at twelve is in unison with the 1st at three. Do not tamper with the 1st and 4th strings because it is the 3rd string you are trying to bring in tune. When you have the 1st, 6th, 4th, 2nd and 3rd strings in tune, in that order, continue with the remaining 5th string.

Tuning the 5th string: Play the tone A on the (in tune) 3rd string, at the second fret. Listen to this pitch carefully and now adjust the 5th string until the harmonic at twelve is in pure unison. When the foregoing steps are followed correctly, the strings will be tuned perfectly to equal temperament. No further tuning adjustments are permissible.